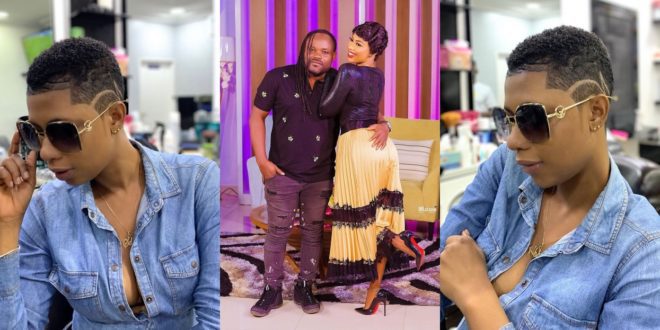 Adom FM’s presenter popularly known as Mike2 has been faced with the wrong and nasty side of Selly Galley’s husband, Praye Tietia of the defunct Praye Music Group after his addition to the cruel comment by a social media user unto the actress.

After the social media user, @henewa_piesie labeled Actress Sally Gally as a baren and also described her as ugly at the comment section of a post, celebrities in the likes of Kobi Rana, Salma Mumin, Mzbel, Nana Ama Mcbrown, and many others joined to react to the issue.

ALSO READ Evangelist Diana Asamoah: It’s a big disgrace for a woman to give birth before marrying

Well, Mike’s Addition is one that draws the most attention as it triggers fury on the side of Selly and her husband. According to him, celebrities should have a bold heart to absorb trolls from netizens as he condemned the couple for cursing @henewa_piesie.

Sometimes those acclaimed celebrities in Ghana should have that big stomach to contain certain things.

Even though what the said lady said to Selly Galley was not palatable, Selly should also know the social media constituency they all find themselves there is a constituency with no MP where things said over there are not filtered…

So has she accepted that she is a barren?.
Celebrities who don’t want to be disrespected or insulted should leave social media…
Will come again…

This message infuriated the husband of Selly Galley who dared him to come out and face him and spew the same garbage he wrote. He Threatened to beat MikeTwo over his ‘Stupid’ post.