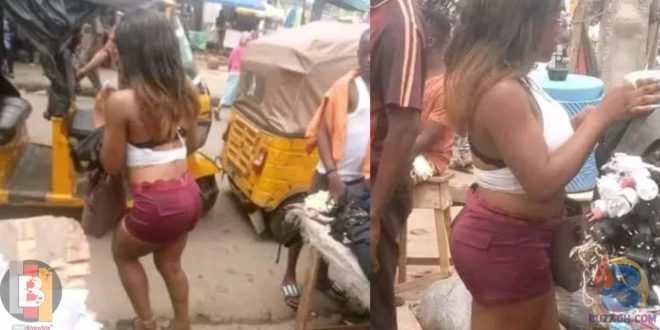 A lady whose name is yet unknown went to the market place to purchase a phone charger and she was wearing a small cloth that did not cover all her body.

People were talking about her right when she got in the marketplace. people were stirring at her due to what she had kept on, the lady feeling unconcern showed no remorse at what happened.

The man that she was purchasing something from begun checking her out in a way that proved the ladies dressing had triggered lust in him.

A lot of people began to suggest saying that this girl is a prostitute who came into the market simply to seduce individuals and look for customers.

On her way out, individuals followed her and asking her why is she kept on that type of garment. She boycotted all questions that were thrown at her as she left the market scene.

After she left the young man she was purchasing from specified saying that he does not understand if she is a human being or not.