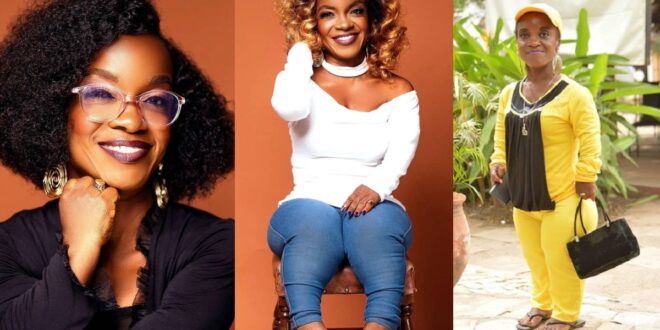 See how Beautiful Adwoa Smart looks in these new photos she posted on social media.

Belinda Naa Ode Oku, Adwoa Smart’s real name, was born in 1965. She is 55 years old. Adwoa Smart is incredibly lucky, and she manages to mature gracefully. She has appeared in and performed in a number of films over the years. Adwoa Smart is a Ghanaian celebrity who while not being able to pursue higher education, has attained fame.

She dropped out of grade school because her classmates made fun of her because of her height. She found it impossible to focus on her exams, so she dropped out at the age of six. Adwoa Smart rose to prominence after being invited to an audition by the late Auntie Rose of Obra fame. Adwoa Smart was a great dancer and a great comedian.

Adwoa Smart has never been married nor has she ever had a child in her life. Adwoa Smart is well-known for her generous donations to the poor and orphans. In her latest pictures, she seems to be very sweet and stunning.

Take a look at some of Adwoa Smart’s stunning photos.