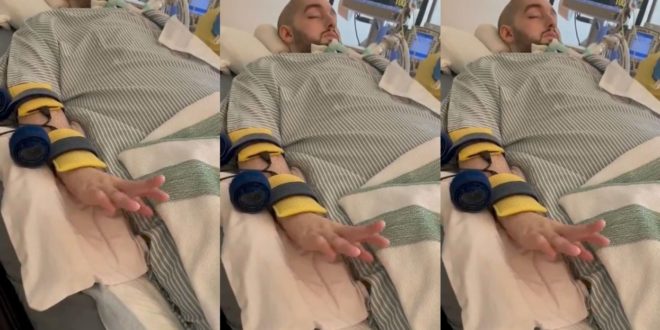 Saudi prince moves his hand after 15 years in coma

Saudi Prince Al-Waleed bin Khalid Al-Saud has been captured lifting his hand after being in a coma for 15 years.

The Saudi prince suffered a life-changing accident in 2005 and it has got him ‘sleeping’ since then.

Al-Waleed bin Khalid Al-Saud who is now 47 years old, was studying at a military college when he was involved in a car crash leaving him with a brain haemorrhage and has been in coma since then.

The Saudi prince was put on a ventilator for a decade and was recorded making an astonishing physical movement about five years ago( in 2015).

In the clip that is making waves on twitter, Al-Waleed can be seen raising his fingers after a woman in the background greeted. The woman continues: “Oh, one more, one more. Higher, higher” until he lift his while palm signaling he hears.

His father, who is the brother of billionaire business tycoon Prince Al-Waleed bin Talal bin Abdulaziz Al-Saud, has refused to give up on his son as he hopes one day he will make a full recovery.