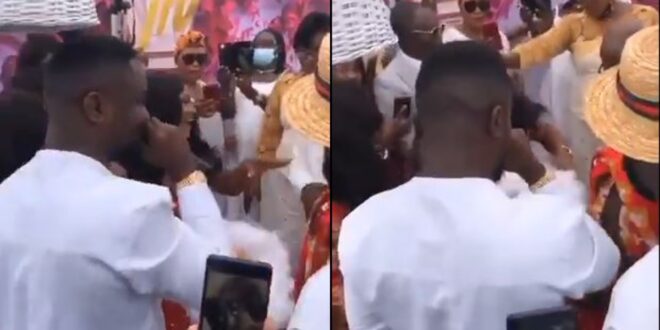 If you were hoping to capture Sarkodie’s girlfriend, you obviously did not get your shot in early because she is no longer available.

We previously announced that Sarkodie and his wife were out for a ceremony when they decided to pose for the camera; indeed, the occasion was his sister’s wedding, and it is no surprise that he was dressed in all white.

Despite the fact that the wedding’s details are kept under wraps, Sarkodie confirmed it when a video of him performing his No Fugazy song during the ceremony went viral.

“Did Mini Rapperholic for big sis ( she deserve that and more ) … God bless this union ❤️🙏🏿” Sarkodie wrote alongside a video of him performing at his sisters wedding.

The rapper can be seen in the video performing with vigor as if it were a concert, while his wife Tracy and other invited guests on the dance floor were also enjoying the show.

Below is a video.