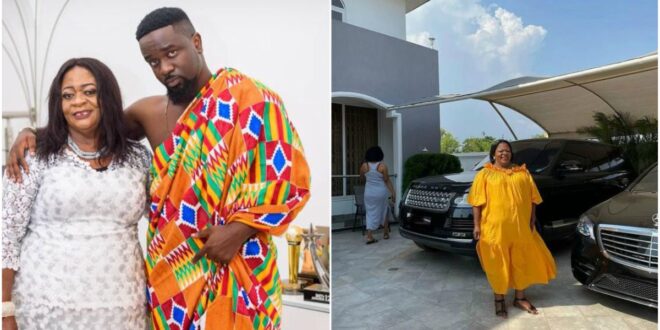 Sarkodie gifts his mother with a mansion, Range Rover, and Benz (photo).

Been the mother of a successful individual comes with its benefits, aside from the pride of having a son or daughter who is a role model, you also get showered with expensive gifts.

A viral picture of Sarkodie’s mother has caused massive stir online, in the picture, she was posed in front of a mansion and two expensive cars.

The cars were Benz and Range Rover, It is believed that Sarkodie has given these gifts to his mother who took the pictures to social media to show her appreciation to her son.

There is a section of the public who believes Sarkodie will not do such a thing, the rapper has earned a tag of been stingy by some Ghanaians and people believe he wouldn’t buy his mother such gifts.

Claims by some people also suggest Sarkodie’s mother visited him at his house and took the pictures on social media.

see the photo below and let us know what you think in the comment section below.