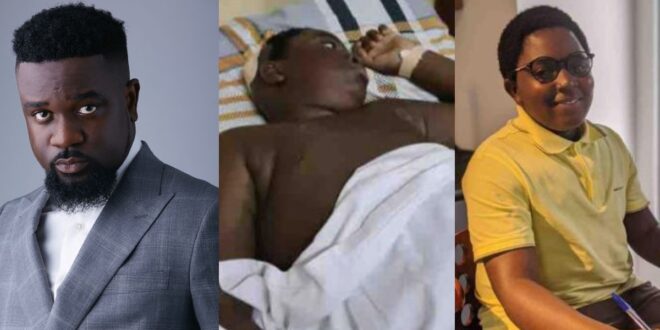 Sarkodie, a Ghanaian musician, has been praised on Twitter for donating $10,000 to help a brain tumor victim undergo surgery.

Michael Kofi Asiamah, a 13-year-old boy, was diagnosed with a brain tumor and needed $30K for treatment.

After seeing a GoFundMe account set up to raise funds for the young boy, Sarkodie posted the link on his Twitter timeline for everyone to see.

The ‘Oofeesto’ hitmaker didn’t stop there, as individual checks showed that he donated a whopping $10,000, accounting for more than a third of the total funds needed for the surgery.

This generous act by Sarkodie, who has been criticized for being stingy, inspired others to donate, resulting in Michael Kofi Asiamah collecting over $31,000.

ALSO READ  Evidence: Mona Gucci exposed for lying about being a lawyer and practicing law in the US

When you look at the screenshot, you’ll see that the top donation is $10,000, which is the sum Sarkodie contributed to the young man’s surgery.