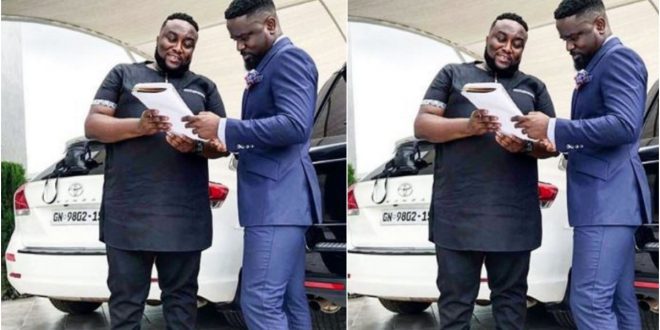 reports reaching our front desk has it that the award-winning Ghanaian Rapper who recently got stuck in the US due to the closure of the Ghana borders, Sarkodie is allegedly selling 3 of his cars to cover-up the cost of his over-stay in the USA.

This was reported by a gossip-monger to the team at Celebrities Buzz via a whats app massage just recently after the rapper returned to Ghana with a newborn son.

According to the gossipmonger, Sarkodie took to the US for his wife to deliver and would have returned a week later. things didn’t go as he planed as the pandemic forced him to overstayed and the BET Award winner spend above his 1-week budget.

He had to borrow money from his team back here in Ghana to cover for the hotel bill and other stuff during the over two months’ stay which he did not plane for.

upon his return, he’s determined to pay back all monies borrowed but since the monies sent to him are way above what he readily has on him now, he has resorted to selling 3 of his cars to cover the cost.

The gossipmonger went ahead to provide pictures to prove his claims but pleaded the pictures are not published out as it will blow his cover.

ALSO READ  Shatta wale reveals why he is fighting Sarkodie, claims he stole money from him (video)