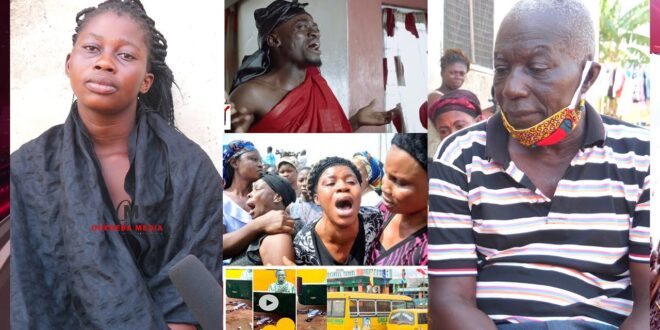 the first interview was given by the mother of Regina Brempong, the 5-year-old girl who was killed by a school bus of  Great Minds International School.

When asked how she felt when she heard of her daughter’s death, Mrs. Cecilia struggled to find her voice.

According her, when the sad news broke to her,  her world came crushing down, she was at work.

She revealed that she thought it her old mother who was  knocked down by a commercial vehicle, but it was later revealed that it was her 5-year-old daughter.

Mrs. Cecilia said the little girl went out to buy food and when she was returning home, her change from the money fell under the school bus, detailing how Regina met her untimely death.

Regina was trying to get the cash from under the bus and it ran over her head, killing her on the spot. She was the second of three kids born, she added.

In her sad tale, Mrs. Cecilia mentioned that the child was buried and Lilwin visited her with promises to give the two children a full educational scholarship.

Watch out for her below.