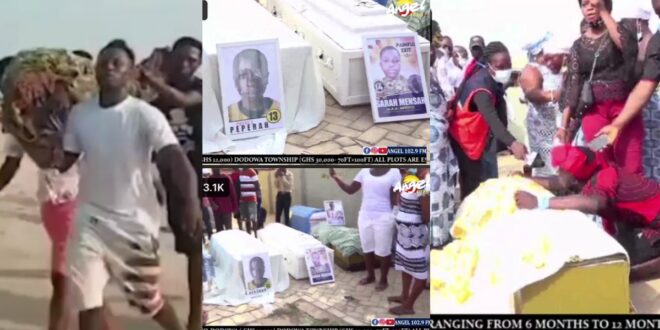 on 8th March Apam was in great sorrow in Ghana’s Central Region after 20 teenagers drowned down on the Apam River after they went for swimming.

it was said that some 16 dead bodies were discovered, as most bodies were washed offshore. while others were taken out of the river. 4 of them survived as they had luck saved by an unidentified Good Samaritan, who went to Apam Palace “Ofar Akwaa Obuada” directly after saving these 4 teens and reported on the children he couldn’t save.

“we were playing football and we saw a girl in the river, we all decided to go in and swim with her and all of a sudden I accidentally crashed with her, she began to fight me on the grounds that, I’ve touched her breast. While we were fighting in the water wave from no where took us.. I was unconscious. I gain conclusions and realized a man have rescued me.” one of the survivor narrated what happened to him

When asked where he knew the girl who h fought with, he said; “I don’t know the girl but I’ve seen her in town before and that was in the market. She was our age type.”

See pictures of the mass funeral rites of the kids below.