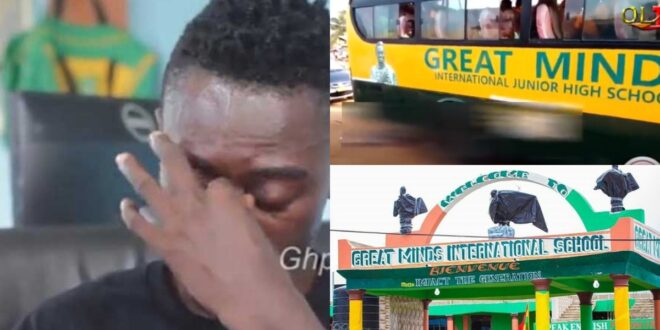 Tragic news reaches, actor Kwadwo Nkansah Lilwin, owner of Great Minds International School, as one of his busses killed a 5-year-old child.
The bad news that occurred on Wednesday was discussed with Adom News for the first time.

the report claimed, the bus took students from their separate homes on Wednesday, 17 February.

An eye witness claimed that the 5-year-old girl, who was not a school student, stood by the bus when the driver stopped to allow the school students to enter the bus, and drove over the girl when the bus suddenly moved, leaving her dead on the spot.

According to the account of the eyewitness, the driver could not see the girl standing by the bus because the bus was very tall.

the driver fled away from the scene out of terror, leaving the students abandoned on the bus after learning that a human being was dead.