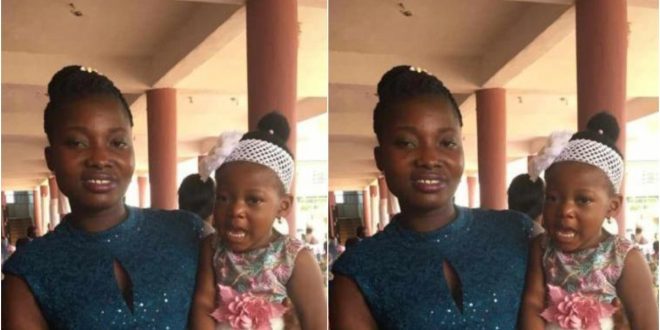 SAD! 3-Year-Old Girl Who Was Stabbed With His Pregnant Mother By Armed Robbers Dies In Kumasi – Photos

It’s very sad to announce that the 3-year-old girl who was stabbed together with her pregnant mother by armed robbers has died.

in a short recall, we reported about a rubbery case in Kumasi-Hemang/Ampatia which a pastor and his pregnant wife and their 3-year-old daughter were attacked.

as we reported earlier, the pregnant woman died minutes after she was stabbed but the 3-year-old girl identified as Belonia Adusei survived and was admitted at the hospital after she was also stabbed by the robbers.

reports reaching us is that after many surgeries on this beautiful little girl she couldn’t survive and has given up to death.

on Wednesday doctors at the Komfo Anokye Teaching Hospital announced the death of the little girl;

“It’s devastating news,” Madam Afriyie said. “The immediate family has been wiped out. We thought she would survive but it didn’t happen,”

its very sad, now the pastor who is identified as Francis Adusei is now left with nothing as his pregnant and only daughter are no more.