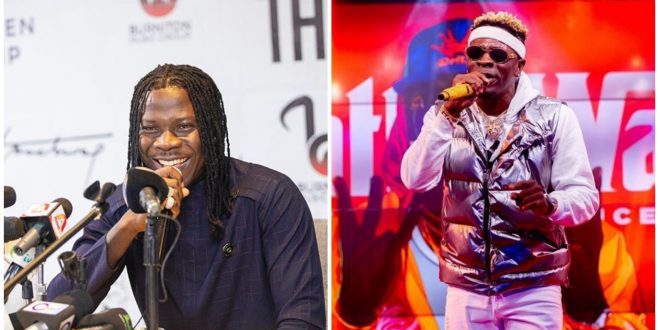 Rivals unite: Stonebwoy and Shatta Wale having fun together at 4syte mansion – video

Ghana’s popular ‘dance hall’ rivals, Stonebwoy and Shatta Wale have been spotted in a recent video trending online as they set aside their differences and have fun together.

For many years now, two of the biggest dancehall musicians in Ghana have been at each other’s throats. At some point, the beef between these two parties was near over but the flame was then ignited again on May 19th, 2019 by Shatta Wale and his crew.

They went up to the stage when Stonebwoy was declared the winner of the Vodafone Ghana Music Awards for Dancehall Artiste of the Year. It all doesn’t matter as they seem to have settled their differences in a trending video.

In the video, the two (Stonebwoy and Shatta Wale) can be seen engaging in a friendly exchange of communication in a mansion believed to be 4syte mansion which leads to both of them laughing with others in the room.

Moments later the two were seen outside the building interacting with the people around. Stonebwoy later can be seen jumping onto a motorbike as he shouts a slogan ‘hungry nation‘ and Shatta Wale also responded the same.