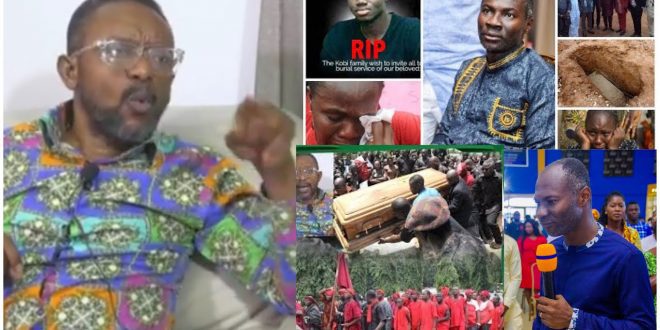 The founder and leader of Glorious Word Power Ministry International, Reverend Isaac Owusu-Bempah, has come out to reveal some more secrets about his former son Prophet Badu Kobi to clear his name from any evil tag.

Rev Owusu Bempah revealed that at first Badu Kobi was his spiritual son until he started walking with Obinim who influenced him to join an occultic group causing him to indulge in some evil dealings which he warned him about.

According to Owusu Bempah, he recalls trying whatever he could to get Badu Kobi to come to his place so he reveals his (Badu Kobi) son’s death prophecy to him but he never showed up.

He added that during the burial of Badu Kobi’s late son, They refused to cover the Grave (even after he stressed on they cover it) with the intention to come back for the body in the night for rituals.

To Owusu Bempah, Badu Kobi’s refusal to show up for his son’s prayers and also not covering the grave proves that his son’s death was a sacrifice.