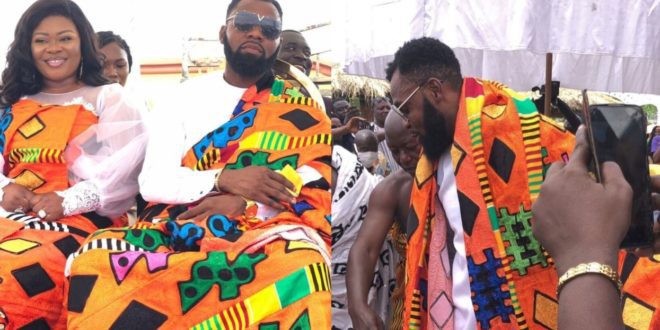 Anointed Palace Chapel Founder, Rev. Obofour, after being honored with a chieftaincy title, has gifted the traditional chief of Tepa in the Ashanti region a brand new car.

The man of God who is noted for his numerous philanthropic works was at tepa with his wife Obofowaa and they were enstooled Abouafohene and Aboafohemaa respectively for their contribution to development in the town.

Obofour, as he is noted for, created a scene on his arrival as a fleet of cars were displayed to flaunt his many riches. Clad in his expensive Kente with his wife, they joyfully picked up their new titles.

ALSO READ: Not all friends wish you well in life – Moesha Boduong advises

The father of 5 before leaving the town added to his philanthropic works as he handed over a luxurious new Jaguar to the chief, Nana Adusei Atwenewaa Ampem.

Video of the car has surfaced – watch it below: