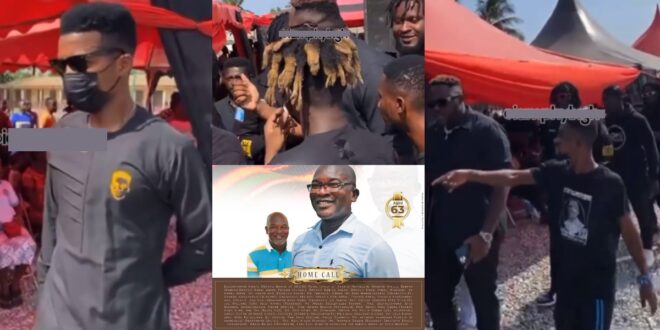 On Saturday, April 24, 2021, Quamina MP laid his father to rest in a final funeral rite at Mankessim in the Central Region.

A host of Ghanaian musicians attended the burial and funeral ceremony to show their respect for their comrade.

AMG rapper Medikal, Kofi Kinaata, and Hiplife duo DopeNation were among the artists who attended the funeral of Quamina MP’s father.

A video of the above-mentioned rock stars attending the funeral of their colleague’s father has surfaced.

Medikal, Kinaata, and Dope Nation had just arrived at the funeral grounds in the video seen by Buzzgh.com.

They were being escorted across the grounds to exchange greetings with the other mourners.

Since they are celebrities, some mourners attempted to mob them, while others requested pictures of them.