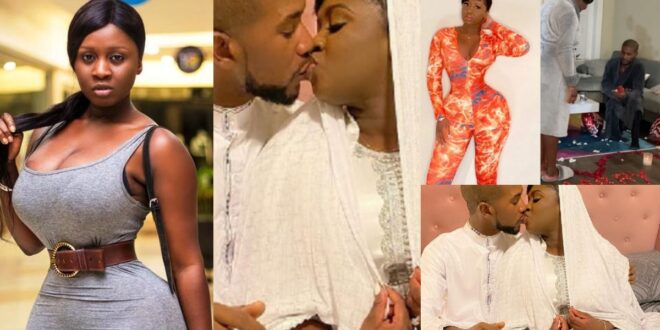 Gambian born actress and Instagram model, Princess Shyngle got married on Sunday, January 31, 2021 in The Islam way, in her home country,  Gambia.

Princess Shyngle before and after she got married filled her Instagram with pictures and videos to convince the world she was madly in love with Prince Gibou Bala Gaye.

The couple is currently honeymooning. Some online portals say that Princess Shyngle may have married her husband because of his wealth.

Princess Shingle’s husband is reported to have been the son of the new Governor of the Central Bank of Gambia, the former Finance Minister of Gambia for more than 10 years, and a major real estate developer.

The young man even plays the guitar and has several side companies.

But in reaction to these online posts, Princess Shingle said angrily that this was not the case, she said she married for love and not for money.

Pr0stitute trade blows on the street with the client for refusing to pay his debts.

Sharing the screenshots of the reports she has seen, she wrote: “Y’all should get one thing straight, I did not marry my husband for his money or his dad’s money 😡😡. I’m genuinely in love and I expect y’all to be happy for me 😊.. I hate the internet 😡😡”