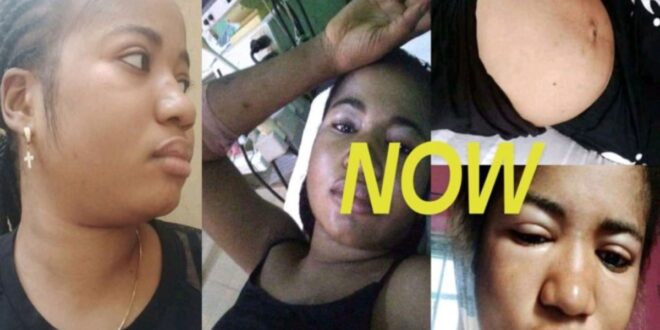 A pretty lady called Ada Jesus has been alleged to be suffering from stroke, and because this is medically unlikely, she has been told to go to those people she hurt with her Facebook post and who have cursed her to avert the curses.

Pastor Odumeje and actress Rita Edochie are two of the people that Ada Jesus claims she helped do certain false miracles in his church, and as a result, the man of God cursed her and she suffered a stroke.

Ada Jesus and her family are seen in a recent video apologizing to pastor Odumeje in his church, pleading for him to forgive her so she can get better, but it is said that he has declined to consider the apology.

According to the footage, pastor Odumeje was unable to acknowledge Ada Jesus’ and her family’s apologies because he only recalled how Ada Jesus harmed his reputation by writing on her Facebook page.

We will not say if pastor Odumeje and actress Rita Edochie can forgive Ada Jesus for the time being, but the condition in which Ada Jesus is actually finds her in dire need of prayers from all of her loved ones.