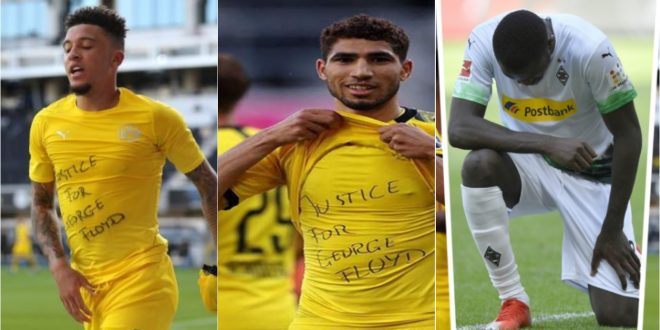 Popular Football stars have joined the protest demanding justice for George Floyd over the weekend.

as we reported earlier, George Floyd, an unarmed black man lost his life while he was while being restrained by Minneapolis police.

ever since the death of George, there have been many protests in some states in America with blacks marching the streets to demand justice to be done.

In Germany where the Bundesliga has resumed in the midst of coronavirus, attacker Jadon Sancho unveiled a ‘Justice for George Floyd’ T-shirt after scoring for Dortmund against Paderborn.

Sancho’s teammate Achraf Hakimi also revealed the same message following a goal of his own.

in addition, American midfielder Weston McKennie also made a statement during Saturday’s round of matches, as he also has a writing “Justice for George” on his captain’s armband.