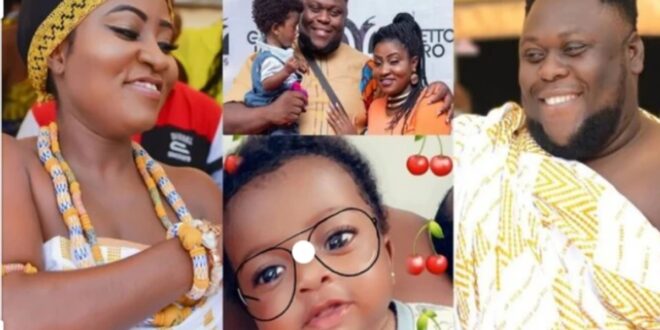 In Ghana’s film industry, Stephen Yao Mawunyo, also known as Oteele or Biggie, is one of the most sought after comic movie actors who has carved a niche for himself by taking laughter and enjoyment to Ghanaians’ homes.

Because of his unusual body shape, he was given the name Oteele by his colleague Yaw Dabo while on set. On the 18th of May 2019, Oteele married his longtime girlfriend, Gifty Nana Afriyie, in Agogo, Ghana’s Ashanti Region.

During the wedding ceremony, oteele happily showed stunning pictures of his young daughter, whom he refers to as “Adepa.”

In an interview with Ltvghana.com, oteele says that after his extravagant wedding with his lovely bride, he has regretted that it has left him penniless because he received little in terms of monetary returns from friends and relatives who graced the August occasion.

“, he explained “That’s the truth: I’m bankrupt, and I’ve wasted all of my money on renting this spot. He laments and cries out, “I was left broke after our wedding, I didn’t make any good out of that.” “..

In an interview with Gifty, Oteele’s wife, she said that her friends were pressuring her to leave her husband because of his size and go look for someone who was her size. She added that the strain wasn’t from her family, but rather from the friends.

“I didn’t let my friends’ remarks discourage me because I saw tremendous promise in the pulse-size actor, and I don’t regret marrying him. Gifty made a statement.”

ALSO READ  Fella Makafui reveals where she met medikal that lead to their relationship.

see photos of them below.