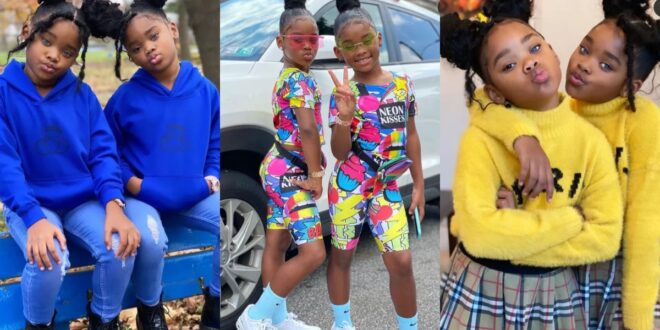 (Photos) 6 years after the crowning of the most beautiful twins, see how matured they are now.

An unforgettable picture of the most beautiful twins in the world caught the hearts of many people when they were just four years old and now they have almost into puberty.

Megan and Morgan Boyd are identical sisters with a wonderful smile and brilliant blue eyes.

One factor that makes these cute twins known as Trueblue twins by their mom is that genetically, Megan has both eyes blue while Morgan has one blue eye and one dark brown eye, scientifically, it is an unusual disorder called Heterochromia.  the twin shared striking similarities and appearance,

On June 6th, 2011, their mother, Stephanie Boyd, welcomed her Twins with her husband, Lovell Knight, and they hail from Philadelphia. As they were growing up, Stephanie began sharing pictures of her daughters and called them true blue twins, the unusual color of their eyes enthralled the world.

In 2015, after one of their photographs went viral, they became internet legends, their success took them into a professional career, their massive fan base made them influencers and ambassadors for Instagram, the twins have a younger sibling, but he does not have the blue eyes.

Look closely at the pictures, you notice the twins look like Rihanna, the American pop star.