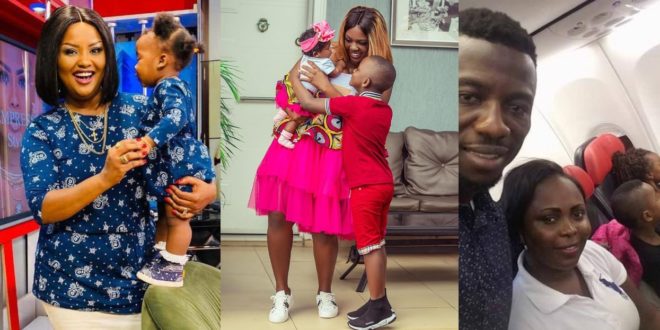 Check Out Photos Of These Kumawood Stars With Their Kids

Most of these kids are really living a flamboyant life due to the wealth of their celebrity parents and I can’t imagine how exciting being born into such a family feels like.

These Kumawood Stars are devoted to giving their kids the best of life as they are willing to go the extra mile to provide everything for them. with this being said there is no scenario to give you than Nana Ama Mcbrown and her daughter Maxin.

A glance at the love the actress showcase for Baby Maxin tells it all – the little girl is very lucky to be Nana Ama’s child.

In this write up we invite you to take a look at lovely moments these Kumawood Stars were captured having fun with their beloved kids.

Kwaku Manu is a father to three lovely kids (two boys and a girl who happens to be the oldest). He is married to Mrs. Okaale and he never fails to flaunt the love he has for his family on social media.

Nana Ama’s love for her daughter Baby Maxin sometimes gets people talking and criticizing her. Due to how she struggled to conceive, she cants stand Maxin being hurt. in fact, she is her world.

Tracey Boakye has two adorable kids who are from different fathers and she loves both kids. the boy who is the eldest is the son of Yahaya Mohammed, but the kumawood actress has failed to reveal the father of her daughter, Nyirah

Vicky Zugah is a mother of two kids (a girl who is the eldest and a little boy). she often flaunts them occasionally during special days. recently the young boy was celebrated when he turned 4.