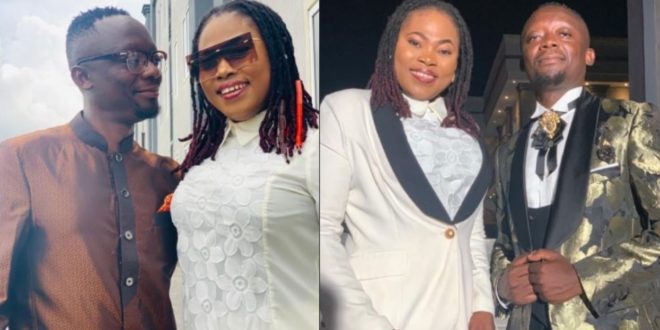 After just months of the tragic encounter with her estranged husband, gospel artist Joyce Blessing seems to have found a new boyfriend and willing to give love another chance.

The musician and her estranged husband who doubled as her manager, Dave joy took over the media space not long ago with news before and after their divorce. their once upon a time lovely relationship did not end well and it was had to be dissolved following lack of faithfulness.

Well, the  ‘Adam Nana’ hitmaker has taken to social media to flaunt a gentleman, and the position the duo were captured in the picture sparks love relationship rumors. The man was all cozy around the mother of two.

This gentleman has been identified as P.O Kwabena Donkor and he is also a gospel musician who has an upcoming song with Joyce Blessing. However, this man has denied all relationship rumors.

According to P.O Kwabena Donkor, the photos which have spiked rumors are all scenes from the music video of their yet-to-be-released songs. see the photos below: