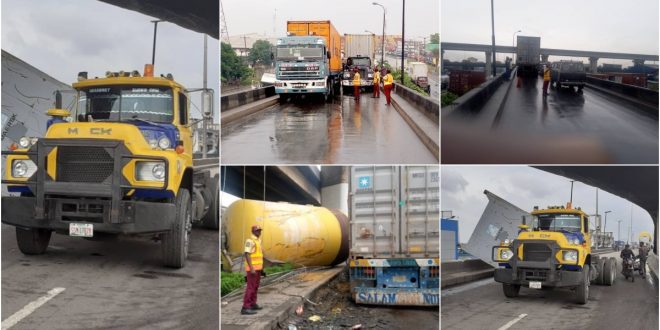 The people of Ijora have escaped death as an accident which could have claimed thousands of lives occurred under the Ijora bridge.

according to reports, the incident happened in the early afternoon of 12th June 2020 at Ijora-Nigeria.

from the photos as we sighted, the gas tank fell off from its tanker truck which was moving on a bridge.

God is so good the gas tank fell from its truck and fell off the bridge as it was moving but nobody was hurt, people weren’t around when it fell.

Men of the Lagos State Traffic Management Authority LASTMA have since arrived at the scene to manage the traffic resulting from the accident.

and Efforts are being made to remove the gas tank from the road to reduce the traffic.

here are more photos from the scene;