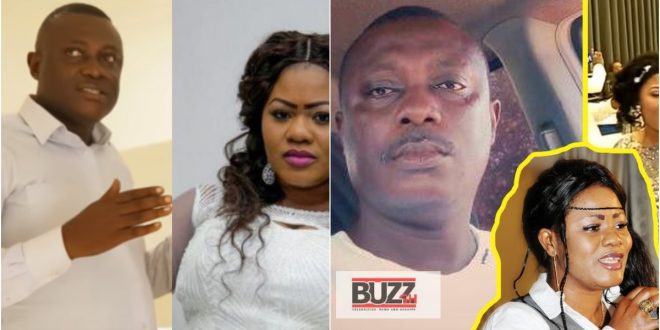 Pastor Love ex-husband of Ghanaian gospel musician, Obaapa Christy has reacted to the juju allegations leveled against him by his first son.

Recently the eldest son of the man of God Pastor Love went to the police to report his father of engaging in occultism which he saw himself during his visit to his father.

Pastor Love has finally reacted to his son’s claims and according to him, he has served God very well even though he might have gone wrong as a human at times but he has never forsaken the almighty God he serves. he added that all that his son said were formulated by his mother(Obaapa Christy) and her family in order to bring him shame.

Pastor Love made mention that, his son came to him some months ago to stay with him as he complained he was been maltreated by his grandmother and his uncle. He stayed with him and had no bad intentions about his son.

According to him he showed the boy the fatherly love expected from every father as they eat together and sometimes goes shopping where he bought him a Phone which he used to have video calls with his mother.

According to pastor love, Obaapa Christy asked the son to secretly film the entire house for her which he did. she(Obaapa Christy) later took the video to Germany to be edited and they added an idol in the video.

months later the son requested to visit the mother which he allowed but hours later he heard his son in a video making false accusations about him with the video they had edited in Germany.