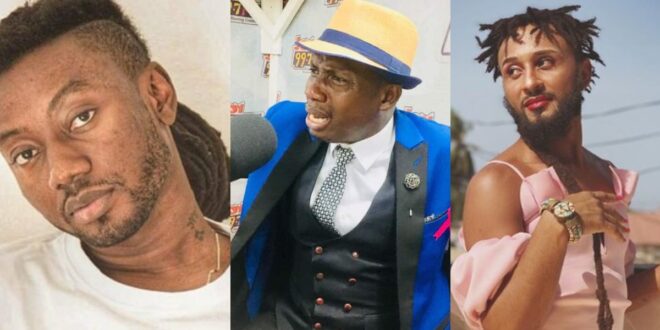 The case and clear positions on the legalization of LGBTQ rights in Ghana continue to persist in the media space and seem to be rising stronger.

Geroge Cyril Lutterodt, the vocal Ghanaian counselor, called for the arrest of Pappy Kojo and Kubolor in Ghana for openly endorsing gayism and lesbianism.

It should be noted that after confessing that he’s homosexual and Yvonne Nelson is his pimp, Pappy Kojo trended over the weekend.

Wanluv Kuborlor also said on a separate show that after being asked to perform at the opening of their office in the country, he is now the unofficial spokesperson for the LGBTQ community in Ghana.

In the studios of Okay FM, Counsellor Lutterodt claimed that these two entertainers must be arrested in order to aid in the location of the LGBTQ office when officials say that they do not know the precise location.

He also added that they must be detained because he thinks they have been compensated and charged with misleading misguided individuals to accept the act that remains a criminal offense in the country.