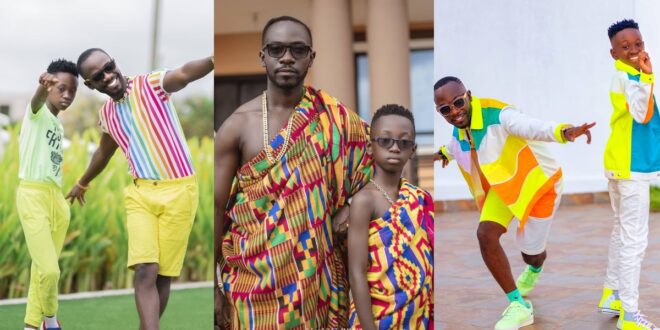 Okyeame Kwame and his son, twin up in stunning kente outfits (photo)

Okyeame Kwame, a legendary Ghanaian musician, is not only putting Ghana on the map with his music, but also with his fashion sense.

The ‘Rap Doctor,’ as he is nicknamed, is known for his Afrocentric dressings, which he demonstrated once again in a cool looking Ghanaian Kente.

Stepping out in the clothes, Okyeame Kwame, who claimed that he is in love with himself, also introduced himself as ‘Nana Tirimude Hene 1st.’ He started by referring to his son as a prince who is poised to ascend to the throne.

“Nana Tirimude Hene 1st. I dey feel myself basaaaaaaa. As for my Prince he wants to inherit me so quickly.” He captioned his post