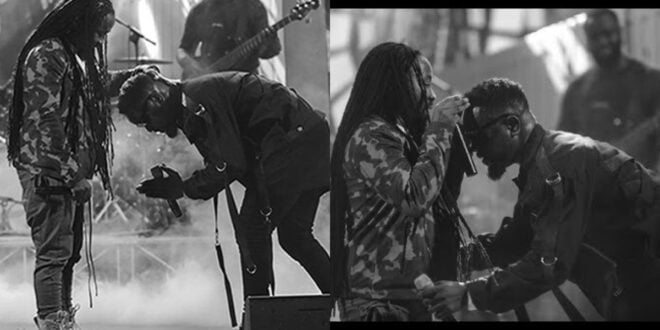 Obrafour, Ghana’s Rap Executioner, shot to fame in the music world but has been notably missing from the scene for nearly a decade.

And it was during Obrafour’s absence from the music industry that Ruthy of Kumasi-based Nhyira Fm thought what may have been the root cause of Obrafour’s problems.

Obrafour featured Sarkodie on a song titled “In This HipLife” in 2010, according to Ruthy in the Nhyira Fm studios on the “Entertainment Force” show.

In the album, and particularly in the music video, Obrafour hands over his rap crown to Sarkodie, but ever since, Obrafour’s life in the rap industry hasn’t been the same, although Sarkodie keeps rising.

ALSO READ  Sandra Ankobiah flaunts a woman she called her wife, is she a Lesbian??

Ruthy backed up her assertion by citing how Amakye Dede was ‘forced’ by Kuami Eugene to be granted the highlife crown in 2019, which has rocketed Kuami Eugene’s fame while Amakye Dede’s appears to sink.

See how Obrafour supposedly traded his fate with Sarkodie in 2010 by watching the music video below: