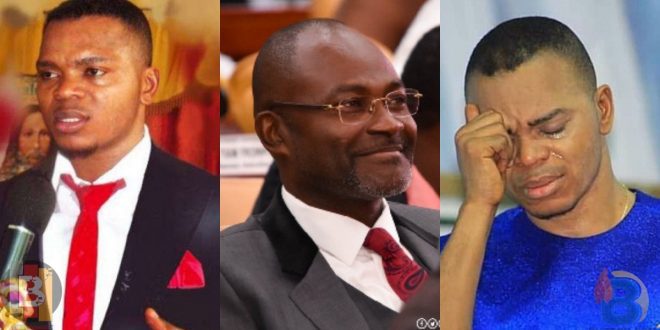 Obinim finally closes all his churches

Bishop Daniel Obinim, the founder and leader of International God’s way chapel, has been engaged in a heated beef with Hon. Kennedy Agyapong over the past few weeks.

The Beef is so hot it got him arrested and sent to court for some allegations leveled against him by the member of parliament who has vowed to collapse all of Obinim’s churches.

The president of Ghana in his speech to Ghanaians, made it clear that he has reopened churches and religious places but the gathering should not take more than a hundred people and service should not exceed 1 hr.

The Junior pastors of Obinim, came out to declare that they have pt measures in place to reopen church but the boss himself have come out to say his churches will remain close because it is hard to follow the presidents orders on social distancings because of the numbers he has.

He revealed that, the churches he is closing has nothing to do with his beef with Kennedy Agyapong, but to obey the presidents orders.

“The rules are too much. For IGWC, Obinim and fans, we can’t adhere to them. We don’t want to have any issue with the government. If I want to go by the protocols I will be conducting a lot of service. First, second, third and even more than a hundred” he noted.

Obinim revealed that he has gone into hiding small to do his spiritual works that is why he has been silent this past few days on social media.

ALSO READ  "Obinim has been sleeping with the maids in his house and his wife knows about this"- Kennedy Agyapong.

“I have hidden myself for a while, there is a reason and that is that I want to do more of the spiritual works. He said.