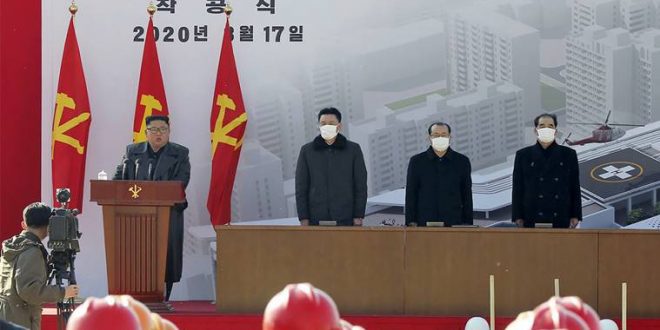 In this Tuesday, March 17, 2020, photo provided on Wendesday, March 18, 2020, by the North Korean government, North Korean leader Kim Jong Un, left, delivers a speech during the ground-breaking ceremony of a general hospital in Pyongyang, North Korea. Kim said it’s “crucial” to improve his country’s health care system during the ceremony, state media reported Wednesday, amid worries about a coronavirus outbreak in the impoverished North. Independent journalists were not given access to cover the event depicted in this image distributed by the North Korean government. The content of this image is as provided and cannot be independently verified.(Korean Central News Agency/Korea News Service via AP)

North Korea President to shoot people with coronavirus in his country.

Kim Jong Un the president of North Korea is taking drastic measures to ensure that the coronavirus does not spread to his country.

confirmed reports from many media houses internationally have confirmed that he has killed the first person who tested positive to the virus.

He ordered the patient to be shot and killed and has also threatened to kill anyone who tests positive to the virus.

Coronavirus is deadly and for now, has no cure, the vaccine for the virus has not been found yet and the WHO has warned that it will take about 18 months for an official medicine for the virus to be announced.