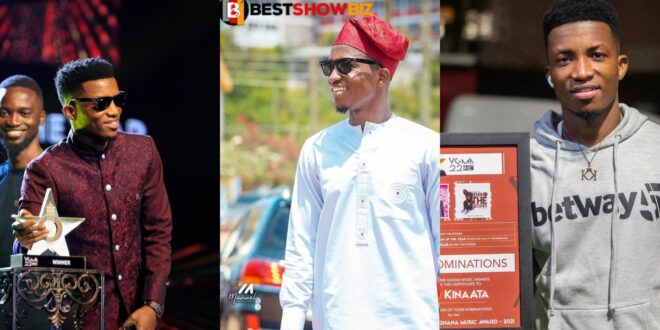 No performer can break Kofi Kinaata’s record, according to the renowned Ghanaian musician.

With his song “Susuka,” Kofi Kinaata won the VGMA Songwriter of the Year award for the first time in 2016.

Since 2016, the great musician has held the honor.

In the recently concluded Vodafone Ghana Music Awards, he clinched the crown once more (VGMA).

Kinaata, who won for the fourth time, declared in a recent interview with Graphic Showbiz, which was seen by bestshowbiz.com, that no artist can beat his record.

“No one will be able to beat the record I have set; winning Songwriter of the Year four times is no laughing matter. It takes a gifted artist to accomplish this, and I have. I told myself after I won the third time that I was going to win the fourth time and create a record, and I am delighted I did,” he said.

“A lot goes into what I put out there. I do not just write for the sake of writing,” Kofi Kinaata said of his composing technique. I spend a lot of time considering what I should put out there, and tonight my efforts have finally paid off. Winning this prize for the fourth time will not deter me from continuing to write wonderful tunes. I want to be known for good songwriting. “

With his song “Behind The Scenes,” Kofi Kinaata won Songwriter of the Year at the 22nd Vodafone Ghana Music Awards, defeating Adina, Diana Hamilton, Epixode, Abiana, and Joe Mettle.