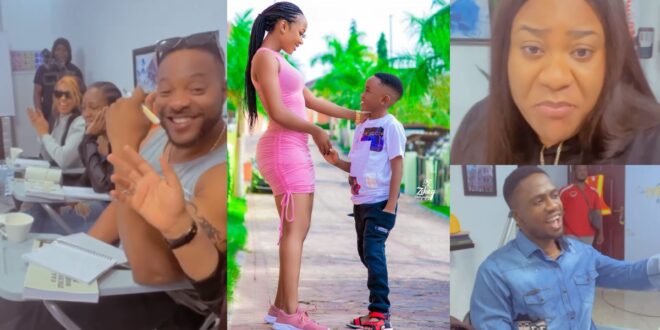 Nigerians also weighed in on the Akuapem Poloo jail controversy and expressed their opinions. A group of celebrities have composed a song for Akuapem Poloo, also known as Rosemond Brown, titled “Akuapem Poloo the Lord is able,” according to a new video spotted by Buzzgh.com.

They are seen sitting in what appears to be a chamber, singing in sections and dancing in others.

Tonto Dike, an actress, and Mompha, a socialite, had previously voiced their support for Akuapem Poloo.

For example, Mompha praised Akuapem Poloo as a powerful woman, while Tonto pressed for her release, claiming Poloo had committed no crime.

She was sentenced to 90 days in prison after pleading guilty to charges brought against her by Child Rights International.

She was found guilty of sharing nude pictures of her seven-year-old son by the judge.

Many people chastised her and advised her to remove the pictures after she uploaded them.

She, on the other hand, slammed her detractors, claiming that it is her website, her body, and she can write anything she wants.

ALSO READ  See how Ghanaians reacted after GHone showed P()rn instead of Nana Addo's address to the nation.

After her lawyer lodged an appeal with the judge, she was issued bail on Wednesday, April 21, 2021.