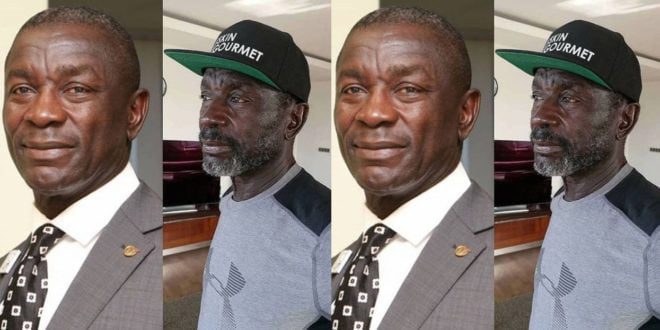 viral photos of Prince Kofi Amoabeng, the former CEO of the now-defunct UT Bank has raised concern on social media and people are questioning his current financial status.

This new picture of the former army captain sees him looking skinny as compared to the Kofi Amoabeng we all know and he has left his beard with grey hair unshaven. he was dressed in a t-shirt with a baseball cap.

Following the photo, there had been widespread suggestions on social media that Kofi Amoabeng had gone broke after the collapse of his UT Bank.

At the start of this year, Kofi Amoabeng encountered what can be termed as the biggest loss ever any wealthy man can go through. The Central Bank of Ghana revoked the license of his bank, UT Bank and he was arrested and bailed over the case of money laundering among others.

This got the 68-year-old businessman off the scene for some time now only for this pale picture of him to surface. While people are speculating that it’s his company’s collapse that has gotten him into this state, others say it’s just old age.

see the picture below: