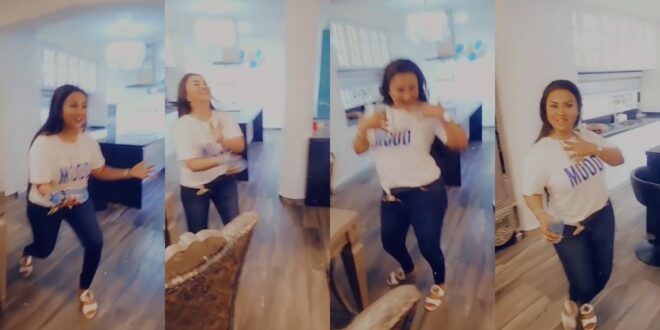 Nana Mcbrown Dances and Jubilates after she went to court (video)

Nana Ama Mcbrown, whose real name is Felicity Ama Agyemang, a Ghanaian actress and television host, was seen dancing and jubilating after her court appearance.

Bulldog’s lawsuit saw her in custody as a witness.

If you remember, Shatta Wale’s manager, Lawrence Nana Asaimah alias Bulldog, was arrested by the National Intelligence Bureau (NIB) in early January for intimidating the President over the government’s failure to charge NAM1 to pay Mezgold Limited customers whose funds had been frozen.

Nana Ama, on the other hand, was summoned by the Accra circuit court to testify about Bulldog’s case.

Nana Ama McBrown recently appeared in court with her lawyer, Roger Quartey, after Bulldog’s threatening message to the sitting president was broadcast on her show.

When asked whether she was called to appear in Bulldog’s lawsuit, Nana Ama McBrown laughed out loud and said it was the court’s agreement.

she apparently had a little fun when she actually returned home to her plush home.