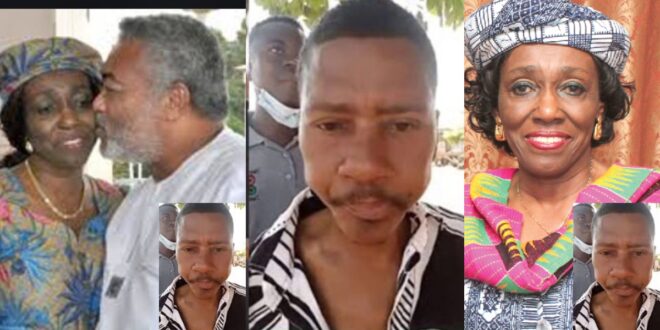 The 3rd alleged child of the late J.J Rawlings has made a shocking revelation about the wife of the former president, Nana Konadu Agyeman Rawlings.

as reported earlier, a 50-year old drunkard identified as Akwasi George has claimed to be the first son of the late Rawlings in a recent interview.

the death of Rawlings has brought about a lot of controversies as many people claim they are the biological children of him.

well. according to Akwasi George, the wife of Rawlings, Nana Konadu tried to kill him when she heard about his existence.

he claimed in an interview as we monitored that one person known as Yaw Oduro who is a residence of his community leaked the information to Nana Konadu when he became one of her bodyguards.

ALSO READ  It will end in tears for NPP if they replace Dr. Bawumia in 2024 - Vim Lady - Video

this 50-year-old man claims Rawlings wife sent some soldiers to assassinate him which he escaped.