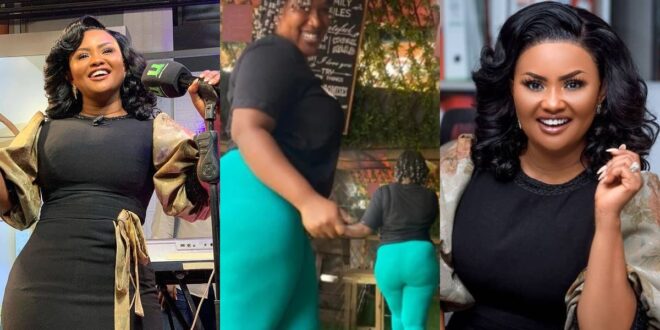 The latest information about actress and television personality Nana Ama McBrown, whose real name is Felicity Ama Agyemang, suggests that she will be involved in yet another tragic car crash.
Nana Ama McBrown and her partner, Maxwell Mensah, were involved in a horrific car crash on the George Walker Bush highway in Lapaz, an Accra suburb, about 2 a.m. in 2013, while returning from the site of a music video shoot with Hiplife group Praye.

Maxwell, who had no major injury, was examined and released the next day, but Nana Ama McBrown, who had a broken right arm, remained in the hospital for more than two weeks and underwent arm surgery.

However, according to a recent forecast, the actress could be involved in another car crash.

Josephine Arthur, a Ghanaian actress and model, revealed this in an interview with Browngh
Her mother recently had the revelation about the United Showbiz host, according to the curvy actress.

“My mum, like me, adores Nana Ama McBrown. My mother is the kind of person who, if she loves anything about you, will begin thinking about it and God will explain those details to her. Nana Ama McBrown was recently the subject of a dream in which she was involved in yet another car accident.” In an interview with Browngh Josephine Arthur told host, First Lady.

ALSO READ  "A Good D!ck doesn't need any help standing on its own"- Juliet Ibrahim jabs men weak in Bed

Josephine Arthur revealed that her mother contacted Nana Ama McBrown’s sister and told her of the “revelation,” but she couldn’t say if the message was sent to the actress because they couldn’t talk to her directly.

Nana Ama McBrown is Josephine Arthur’s favorite actor, and she holds her in high regard.

She also shared her wish to visit Nana Ama McBrown in the future.