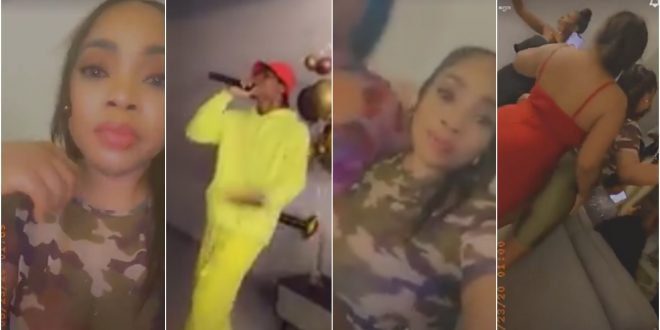 In a video spotted online, most of Ghana’s celebrities seem to have gone against the social distancing order that was kept in place by the government to ensure that coronavirus’ spread is kept at a minimum.

The laws were enforced on the local people even to the extent that the military got involved in areas of Kumasi and Accra. This recent video has proved that indeed the rule of law is not being practiced here in Ghana.

In the video, respected broadcast journalist Nana Aba Anamoah and her friends like Sandra Ankobiah, Moesha Buduong, Efya, KiDi, Kwesi Arthur, Darkovibes and a few others were seen at a party that had more than 25 people in attendance. Something that goes against  President Akufo-Addo’s ban on social gatherings.

According to sources, all these celebrities had gathered there to join Sandra Ankobiah as she decided to throw another birthday party for herself.

The said celebrities especially Nana Aba Anamoah and Sandra Ankobiah where once feature in the COVID-19 documentary released by GHOne TV during the early stage of the outbreak. They appeared to have gone contrary to what they advertised.