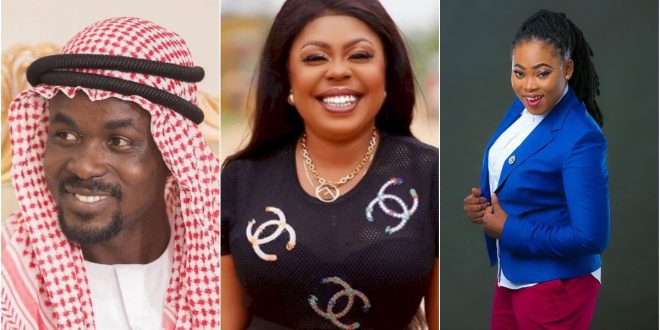 Self-acclaimed queen of comedy Afia Schwarzenegger has alleged that the CEO of MenzGold, NAM1 is behind the collapse of gospel singer Joyce Blessing’s Marriage.

According to Afia Schwarzenegger in a video on her YouTube channel, the marriage of Joyce Blessing and her husband Dave Joy was doing well until NAM1 came in and gave her an ambassadorial deal.

“In all this I blame Nam 1, that guy is evil, he is cursed, there is nothing in this world that that guy touched and it prospered. Everybody that he associated with their lives have never been the same. Look at George Quaye, look at Shatta Wale and Michy, they were taking ‘bullets’ for each other, and the moment he came into their lives their union hit the rocks.

“Joyce Blessing was doing well, look at what his association with her has done, now her marriage is ruined, even the house you gave them, you didn’t finish paying for it, now that they are divorced, what will they do with the house?”