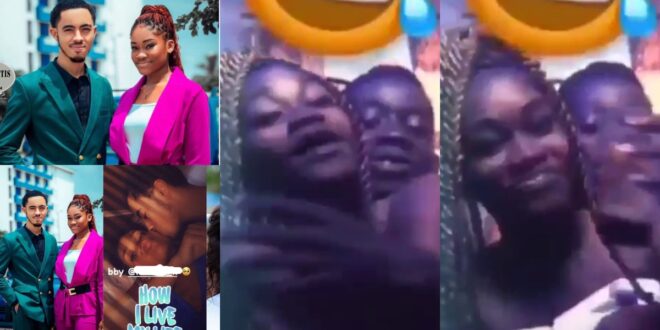 Naa Koshie, James Ian’s girlfriend, is seen in a video chopping love in the arms of another man.

we discovered a video of James Ian’s girlfriend, Naa Koshie, relaxing in the arms of another man.

Afia Schwarzenegger’s  son, James Ian Geiling Heerdegan, who recently showed off his girlfriend at his matriculation, posted a bedroom photo with her only a few days earlier.

James is currently pursuing his Bachelor’s Degree at the University Of Professional Studies.

During his matriculation, his girlfriend, Naa Koshie, a social media influencer, was right there beside him.

In the photo, the young lovers can be seen wrapped around each other. They took a photo of their special moment together in bed and shared it on social media, clearly clouded by love.

In a video circulated on social media, Naa Koshie, James Ian’s girlfriend, is seen having fun in the arms of another man.

The guy and Naa Koshie can be seen cuddling and kissing each other.