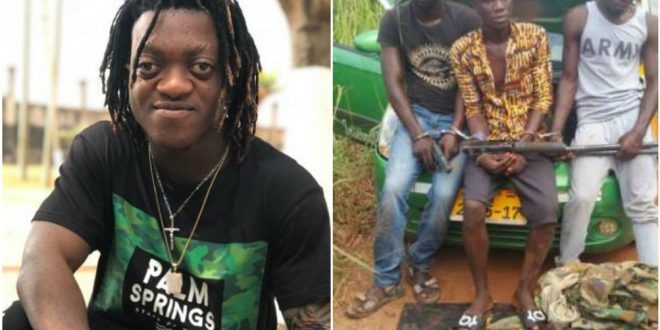 “My popularity saved me from armed robbers” – Sunsum Claims

Kumawood actor, Yaw Adu, popularly known as Sunsum has disclosed that if not for his popularity he would have been robbed or even had been killed by armed robbers some time ago.

Speaking in an interview on Accra100.5FM, Sunsum said: “When a star is passing, people follow him and want to take pictures with him; that’s a star…. I came across armed robbers who wanted to beat me up but then they were like: Isn’t that Sunsum, he’s a good man, let him go’.

“There are stars who, when they get to Circle, will not let those loading boys come close to them, but I get down from the car and fraternize with the boys there,” he added.

He continued: “We had a show at Berekum, Lord Kenya was there; while on stage, the boys attacked us, so, everyone was running for their lives and I also looked for a place to hide and landed at the wrong place, a place where these boys had gathered.

The place was dark, they had knives and were screaming: ‘Bring everything you have on you!’ One also pointed a gun at me and then all of a sudden, one asked if I was Sunsum, and I responded, ‘yes, it’s me’. Prior to that, when we got to the town, I went to the ghetto to give them something little and to inform them that Sunsum was in town and, so, they should come and support me. So, one of them reminded them that Sunsum was here yesterday to give us money in the ghetto, let’s leave him alone. So, they themselves guided me out of the place and helped me back to my hotel.”