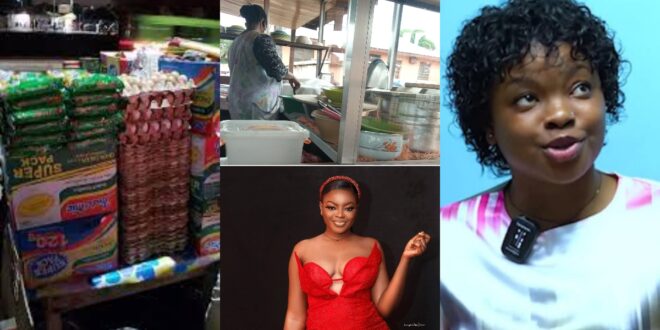 “My mother sells Indomie and Banku, so what??”- Rose blast critics who exposed her (video)

Rose from Date Rush has spoken to the backlash she received since the ‘Date Rush Reunion’ episode broadcast on TV3.

If you remember, Rose mentioned that she does not ride in trotro and always prefers uber or bolt, but her date can only afford trotro.

She was severely chastised as a result of this.

Following that, a story surfaced claiming that she is not who she claims to be.

According to people who know her very well, Rose uses trotro, and her mother sells indomie, .

In an exclusive interview with ZionFelix on the ‘Uncut’ Show, Owusu Konadu Rose responded by saying that it is fine if her mother sells indomie or food to support her.

She reported that her mother sells indomie, corn, banku, and other similar items.

Rose responded that she chose trotro for school when she was at level 100 during her time at GH Media School.

She went on to say that there are different phases of life, but it is not a big deal if she chose trotro in the past.

Rose also explained that she is often referred to as Khadija.

Watch the whole conversation in the video below.

ALSO READ  Ayisha Yakubu is the prettiest Muslim bride this year, see the dresses she wore on her big day.
Share