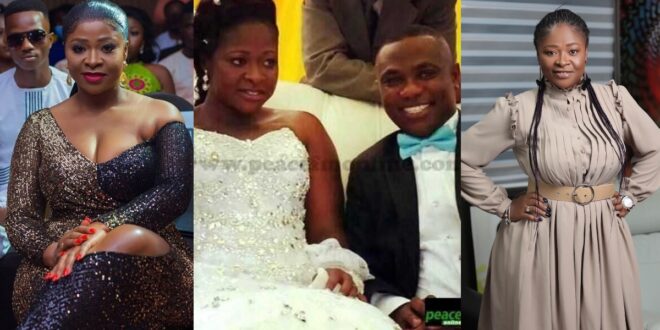 My marriage to a pastor was my worse nightmare – Portia Asare

Portia Asare, a Kumawood star, has opened up about her broken marriage. She admitted in 2019 that she married not out of passion, but because she was forced to.

That may understand why her marriage fell apart.

In an interview with Delay, she admits that she was unhappy in her marriage and that it has nothing to do with the fact that her husband is a devout Christian.

“My former husband was neither violent nor a womanizer but we just didn’t click. I did what a wife would do to make her husband happy. My direction was different from his so we could not make things work.

“I was married to him for five years but separated for two years and we finally called it off.”

She claims she was married for five years, but divorced after a two-year separation.

About the fact that she has two children from her first marriage, she feels she might find love again and that there is a man out there who does not mind.

“I was married to him for five years but separated for two years and we finally called it off.

“I am also a devoted Christian who loves to serve God well so marrying a pastor was not the issue. I am not the first woman to be divorced neither would I be the last.

ALSO READ  Nana Akua Addo admits that her husband cheated on her with another woman but she won't leave her marriage. (video)

In terms of her film career, she reveals that she has been self-producing for some time and that we should expect some films from her.