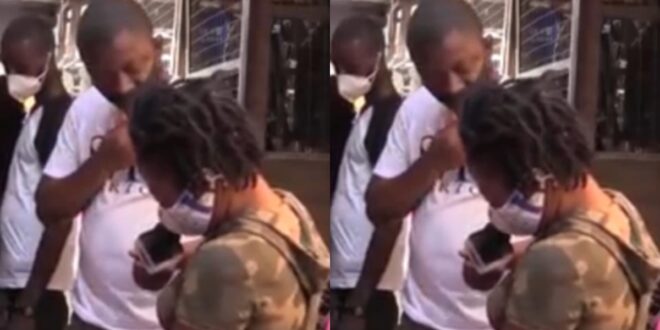 “My husband has been sleeping with our 20 years old daughter”- Sad Kantamanto seller narrates her sad story.

A fols bail seller named “s3 woman s3 girl” by the nick name, meaning like a woman like a girl, have  four children, the eldest is a 20-year-old girl, and the other three are boys.

in an interview with SUTV, she narrated how her husband has been sleeping with her 20 years old daughter.

below are her word for word account on what happened.

My husband and I gave birth to four children and I began giving birth with my husband at the very tender age of 17. We live together happily, together with our four children, in a rented home.

My husband is a drunkard and also a smoker of weeds. I have told him to quit many times, but he never listens to me. Not long after, he chose not to give me housekeeping money again, and anytime I questioned him for housekeeping money, he would just yell at me and leave like that.

I am a foss vendor at Kantamanto Accra, because of the coronavirus pandemic the business is not going well nowadays as before.

My husband will leave home early at 4 a.m. and arrive home intoxicated and weak at around 6 p.mNowadays, I do not feel happy at home, I am over thinking because there is no money for me to offer, particularly to the girl among the boys, .

She said, she is afraid she could change to a prostitute for a girl or she could pursue boys for money. ”   As time went by, my husband began offering our 20-year-old girl money.”
This has been going on for two solid weeks, and I am not pleased because he is just offering money to the girl leaving three boys .One day I decided to ask him why only the girl  he always gives money, but all he could tell was “abi she is a girl, that is why.”

Meanwhile, I could not understand my husband was secretly having se* with our 20-year-old child. Since she was not pleased about what her father was doing to her, the girl told me on her own.

My daughter informs me that if she refuses not to do or warn anyone about it, her father threatened to kill her, she claimed it went on for a very long time.

Reference from the interview with SVTV Africa.