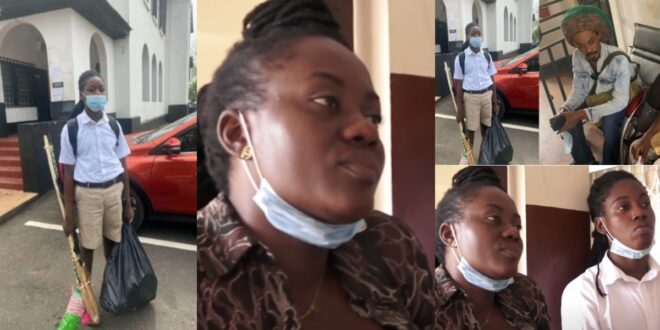 Mother of Rasta Boy who was refused Admission at Achimota speaks, says the school don’t want to even talk to them

The mother of Maanaa Meyers, a Rastafarian student who was refused entry to the Achimota School because of his dreadlocks, has spoken out against the school’s decision.

She is shocked and saddened, she says, that the school and its administration have taken a firm stand and are unable to negotiate on his son’s admission.

Maanaa Meyers, speaking to the media after the back-and-forth between Achimota School, GES, NAGRAT, and other interested parties, said the school’s demand that his son cut his hair before being admitted is unjust.

“I am quite disappointed because there was no room for compromise. They were only insisting that we cut the boy’s hair.”

I even asked if there is any compromise where we can even tie the hair a certain way where it will not look disgusting as people perceive it… and they said no,” Maanaa Myers said

Meanwhile, the public is split over the school’s refusal to accept the Rastafarian student because of his hair, despite the fact that Achimota School has admitted Caucasian students with comparatively longer and overgrown hair in the past.

Despite an earlier intervention by the Ghana Education Service, the college, with the support of its Old Students Association and NAGRAT, has insisted that the Rastafarian student must cut his hair or forfeit entry.