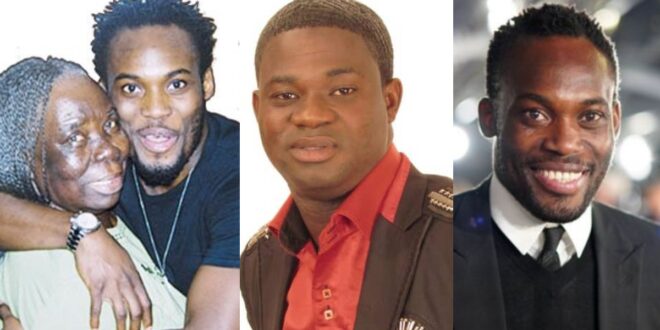 ‘Micheal Essien is not an LGBTQ member because he and his mother go to SDA’- Great Ampong.

The best Ghanaian gospel singer, Isaiah Kwodwo Ampong, also known as Great Ampong, has clarified that, although Micheal Essien has expressed support for the LGBTQ community, he is not a member of it.
He was shaken to the bone when he learned the footballer’s remark about the LGBTQ, he said in an interview with Fiifi Pratt on Kingdom Plus FM, which was tracked by buzzgh.com.

He told Fiifi Pratt, however, that he can tell with certainty that the ex-Black Star player isn’t one of them because he and his mother are devout Seventh-Day Adventists (SDA).

Micheal Essien recently found himself in Ghanaian traps after he waded into the debate about LGBTQ rights, claiming that their rights should be granted to work.

ALSO READ  "If It's Not Beyonce, Nobody Should Pair Me With Any Ghanaian Artiste" - Wendy Shay Warns