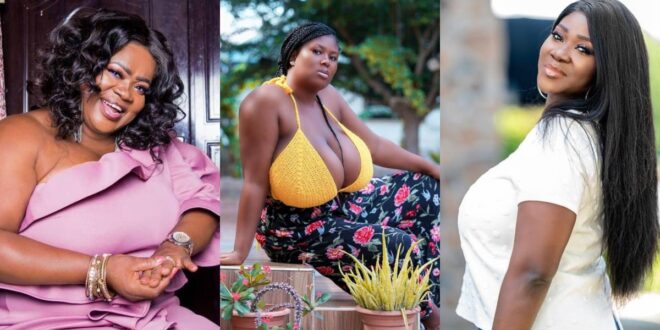 “Mercy Asiedu and Mercy Johnson gave me confidence when i was body shamed.”- Paticia Amoah

In an interview on Peace FM, Millicent Paticia Amoah, a young Ghanaian actress and video vixen with big boobs who shared her life story.

According to Paticia,  her busty appearance is real and not an artificially enhanced one, and she inherited it from her grandma in her family.

when she was young, Paticia said she experienced her classmates’ body shame comments that also made her grow a hatred for school.

Paticia said Mercy Johnson and Mercy Asiedu gave her confidence and inspiration that forced her to grow a thick skin to survive the body shames from her mates.

She almost quit going to church when her friends used to sing songs using her heavy chest.

Paticia went ahead to say her aspirations and how far she plans to go in the next years in her acting, video vixen, photo model career.