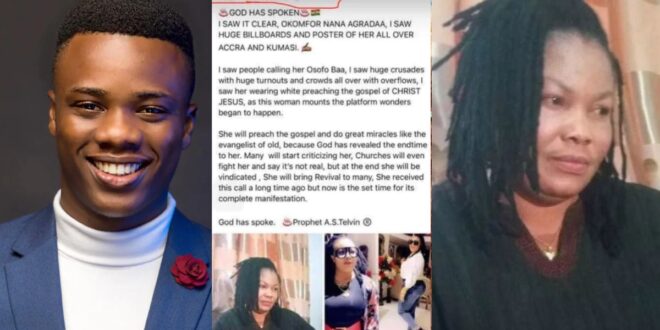 The conversion of Nana Agradaa from orthodox faith to Christianity is the most talked-about subject on social media right now.

Agradaa revealed at the press conference that she had discovered Christ and was giving up her worship of ‘gods’ to become a Christian.

As a result, she dropped the name Nana Agradaa and requested to be known as Evangeis Patricia Oduo Koranteng.

Many people on social media were stunned by Agradaa’s change of heart and confidence.

But it is only a manifestation of God’s word once per young man.

Telvin Sowah Adjei, a young man who views himself as a prophet of God, is unsurprised because he appears to have predicted Agradaa’s repentance in a prophecy.

Sowah Adjei posted a screenshot of his prophecy with a December 19, 2020 date mark.

Sowah said in his December 2020 prophecy that he had sn Agradaa on large billboards across Accra and Kumasi.

She worked miracles and drawn large crowds to her crusades, prompting others to doubt her ministry’s authenticity.

However, according to Sowah’s prophecy, Agradaa, also known as Osofo Baa (Female pastor), will be vindicated.

Sowah re-shared his prophecy after hearing about Agradaa’s repentance, despite the fact that his prophecy had received no coverage at the time.