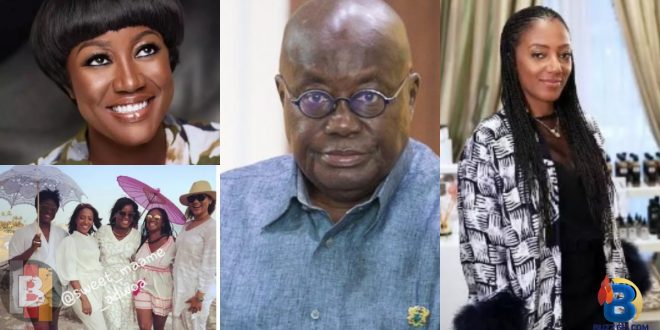 The president of the Republic of Ghana Nana Akufo-Addo has been in office since 7 January 2017. He first ran for president in 2008 and again in 2012 which he lost to the late former president John Evans Atta Mills.

Nana Addo Dankwa Akufo-Addo was born in Accra to the Edward Akufo-Addo and Adeline Akufo-Addo. He began the Philosophy, Politics and Economics course at New College, Oxford in 1962, but left soon afterward. He also  read Economics at the University of Ghana, Legon, in 1964, earning a BSc(Econ) degree in 1967.

he is currently married to Rebecca Akufo-Addo after4 he lost his first wife and they are blessed with five(5) adorable daughters who rarely appear in public.

The five daughters are Gyankroma Akufo-Addo, Edwina Akufo-Addo, Adriana Dukua Akufo-Addo, Yeboakua Akufo-Addo, and Valerie Obaze. We have taken the pain to sample pictures of these girls so you can once again have a glance at their beauty since coming by their pictures is no easy task.