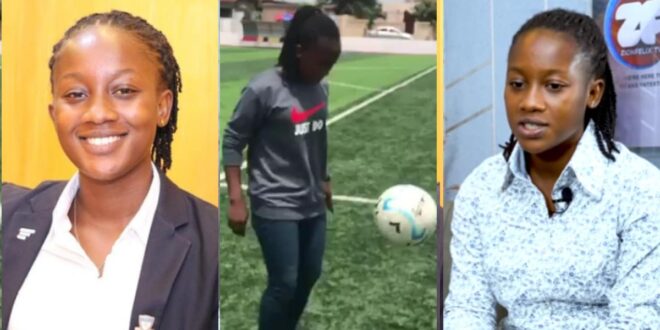 She works for Angel FM. Yeboah discussed her path to become a sports analyst with Felix Adomako Mensah of Zionfelix TV.

Despite the obstacles women face in the industry, Joyce Annoh Yeboah, 21, is flourishing as a female sports analyst in a male-dominated field.

She has found a way to cope by combining her job as a sports commentator with her schooling at the Ghana Institute of Journalism (GIJ), where she is following a curriculum to advance her career.

Yeboah had wanted to nurture her childhood ambition of being a footballer when she grew up, but she had to drop the dream due to illness at the time.

Yeboah, who now works for Angel FM (ABN) and is known as Ephiya Empress on the radio, had a rough teenage life with her career, attending four senior high schools until eventually graduating from Garden City Commercial School in Kumasi, Ashanti Region.

Yeboah revealed that social mdia aided her unplanned path to niching a career in a male-dominated sector.

She was a first-year student at GIJ at the time, and she competed in a football competition, earning the prestigious award of Woman of the Tournament and Ghc300.00.

ALSO READ  Guy Takes A Lady On A Date And Run Away Because Of The Bills; The Lady Cries Out

Yeboah made touch with the program’s organizer, and her fate was later associated with Saddick Adams, commonly identified as Sports Obama, a well-known sports presenter.

Yeboah, who has cracked the glass ceiling after almost a year as a female radio analyst, tells her story in the interview below.