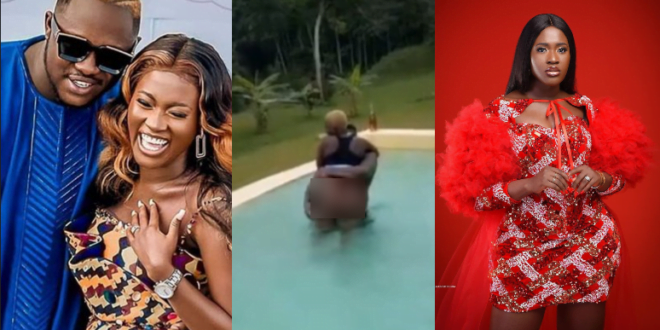 Fella Makafui and Medikal, a Ghanaian celebrity duo, have turned the internet upside down with a video of them swimming with Fella fully nude down below.

They were seen swimming in a private pool as part of Medikal’s birthday celebrations on April 5, 2021.

Medikal is already in the pool when Fella moves to join him in the frame.

She did so by exposing her bare backside, which Ghanaians consider to be lewd and frowned upon.

With his two hands, Medikal raised his wife and began fondling her bare backside.

Fella made some amusing noises before Medikal threw her into the pool with a loud bang, causing her to yell.

In the video, the two have discussed their ‘bedmatic’ abilities when lying in bed together.

Fella’s appearance and attitude in the video drew criticism from Ghanaians.

One pastor cautioned her not to embarrass married people by exposing her lewd exposure on the internet, according to a previous study.